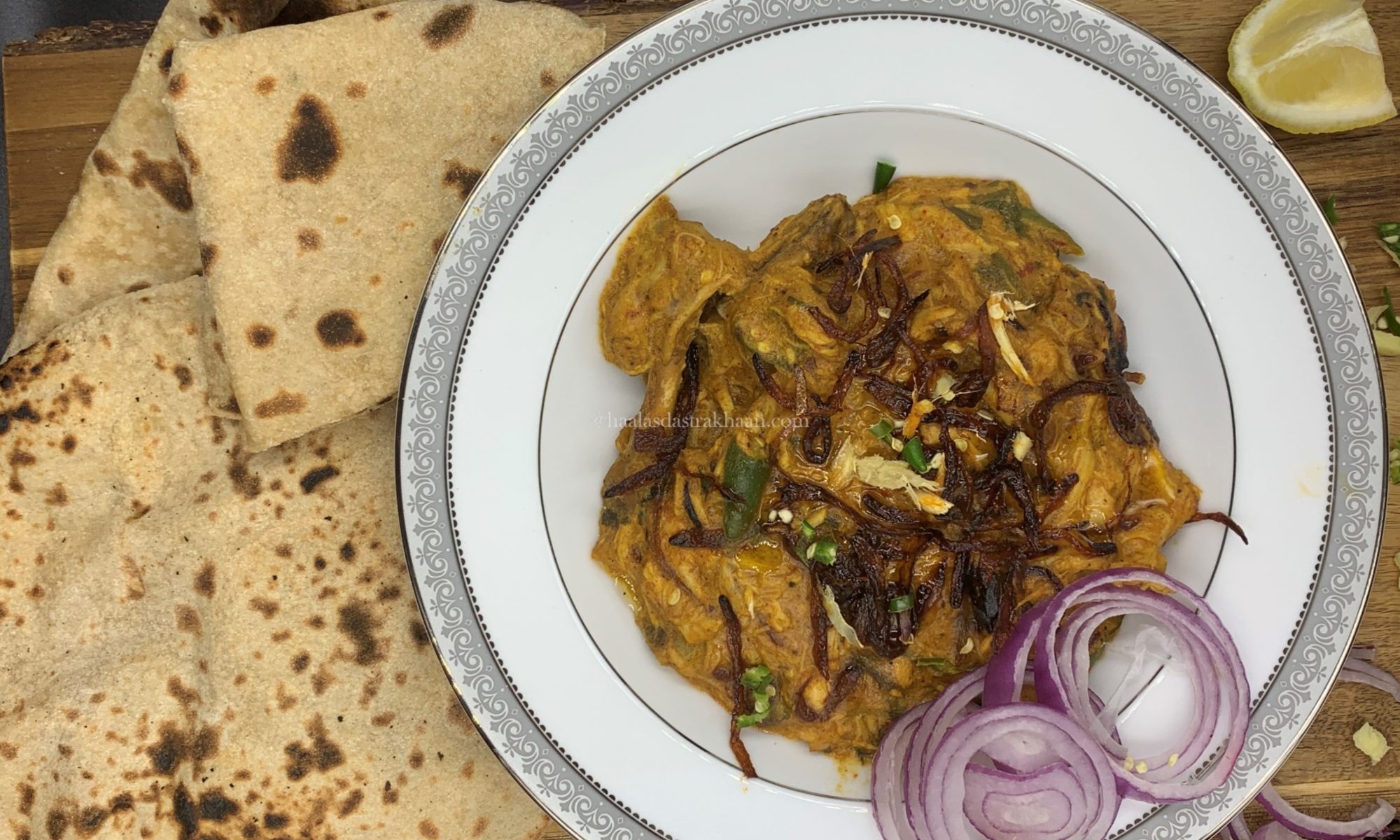 Nihari is hot, spicy, and very earthy. usually made with Mutton and even Beef, but tastes equally amazing with Chicken too. Nihari is one amazing and luxury dish served for breakfast. I still remember traveling to Delhi since I was a kid and I would always look forward to having Nihari. My father always preferred Chicken Nihari since we don’t consume Beef, he found it hard to believe small restaurants selling Beef Nihari as Mutton Nihari. Back in those days, almost 25-30 years ago, it was hard since the restaurants in “Purani Dilli” or the “Jama Masjid” area, restaurants weren’t as hip as what they are now and definitely not too comfortable for people to go with families. My father would always send in a servant who would travel with us to get some Mughlai Breakfast. Paaya, Kheema, Bheja and Nihari.

Nihari is always topped with some Barista, julienne ginger, green chilies, coriander leaves, and Lemon. When I was a teenager, my mom started making Nihari at home. She would make it with Mutton as well as Chicken. Even though I had the dish so many times, I never had the urge to try making it myself. Initially, my mom depended on the masala powder that used to be sold in Delhi. But as she kept cooking, she figured out how to make it by herself. The packet had the list of ingredients and my mother with a few experiments, got the knack of how much of each ingredient should be to make the perfect Nihari masala.

I had this dish so many times and honestly, it’s one of my most favorite ones too but I never felt the urge to attempt it. And then after trying different recipes for Chicken curries, I thought of giving Chicken Nihari a try. I asked my mother for the proportion of the spices and the recipe and gave it a try.

My mother always cooked the Nihari using Ghee, but during a trip to Jama Masjid, New Delhi with Mr. Parveez and I went to a restaurant and while talking to the chefs and people working there we found out that the traditional Delhi Nihari was cooked using Mustard Oil. I know that sounds weird but it’s true. Though I made my Nihari using Mustard Oil, I couldn’t just use all Mustard Oil since it’s pretty strong and I prefer mixing it with little Olive Oil. I also used Ghee for tempering.

Nihari is basically a traditional Muslim dish that was introduced by the Mughal kitchen. Nihari has a slightly different version in every region it’s made because with time every region develops and blends its flavors with the original recipe. Nihari comes from the Persian word “Nahar” which means “ early morning”. Nihari is basically a morning dish and is eaten for breakfast. I believe the way the spices blend in and the way it’s cooked, eating it for any other meal would be too heavy. Nihari always comes out more flavorful if it’s slow-cooked. Back in the day, the chefs would cook it overnight. Of course, that ain’t possible but, I still feel that cooking it on low flame slowly, makes it more flavorful. Using a heavy bottom pan is always better too.

The spice mix makes Nihari earthy and aromatic. It’s spicy but not too hot that would make you cry. The barista and thin slices of Ginger with chopped onions and green chilies are what make it more delicious. Therefore, don’t skip it if you want to get complete satisfaction. fried onion and julienned ginger at the end can be skipped but I would recommend you to definitely use it. The mild sweetness of the Barista balances the spice. Nihari has a lot of history and though the dish is simple, it does require a lot of time and a little effort, but in the end, it’s all worth the effort.